Perl in the borderless border triangle

Here Europe is growing together

There is hardly any other place where this sentence fits so well. Perl is located in the borderless border triangle of Germany, Luxembourg and France, right next to the Luxembourg municipality of Schengen. The Schengen Agreement, signed on June 14 in1985 on the passenger ship "M.S. Princesse Marie-Astrid" on the Luxembourgish bank of the Moselle and since then has stood for a common Europe without borders.

The municipality of Perl extends from the beautiful Moselle valley to the wide fields of the Saargau. In the district of Merzig-Wadern, the green circle, Perl not only has a spatial privileged position. Due to its border location, the Moselle community has been able to record a steady population growth for years, contrary to the general trend. For the period from 1998 until today an increase of about 40 percent is documented. This extraordinary growth is primarily due to the influx of new residents. The proportion of foreign citizens in the municipal area is currently more than 35 percent, with more than 60 different nations. This intercultural framework with two national borders and many different cultural and linguistic influences also shapes public life and gives Perl an extraordinary dynamism.

Discover | Experience | Enjoy
In addition to the strong dynamics and the interesting job market, the border triangle is known above all as a tourist region. As the gateway to the premium hiking region Saar-Hunsrück, Perl is one of the best hiking destinations in Europe. Perl is the starting point for two of Germany's most beautiful long-distance hiking trails, the Moselsteig and the Saar-Hunsrück Steig. At the same time, various premium hiking trails offer wonderful opportunities to experience the region up close on day trips. Just as exciting and varied is an exploration tour by touring bike or mountain bike. The Moselle cycle path is currently one of the 10 best cycle paths in Germany.

Discover Roman heritage - In the district of Nennig, you will find the largest and best preserved Roman mosaic north of the Alps. In addition, the archaeology park Roman Villa Borg offers a deep insight into Roman life. It was discovered at the beginning of the 20th century and excavated from 1987 onwards. Today the complex, consisting of manor house, residential and farm buildings, villa bath, tavern and gardens, has been reconstructed true to the original. The museum displays original finds and replicas. In the Roman tavern, you can still enjoy the culinary art of the ancient Romans. Also worth seeing is the castle of Berg, the park of Nell with its baroque garden and the neighbouring castles in Sierck les Bains and Manderen.

Excellent restaurants and wineries, inviting hotels and guesthouses as well as a wide range of cultural and leisure activities make a visit to Perl unforgettable.

Excellent wines of the Moselle from the Saarland
Viniculture and wine are central elements of the culture and have always shaped life on the Upper Moselle in the state of the Saarland. Economically, socially and culturally, but above all in terms of interpersonal relationships are the viticulture and the practicing winegrowers important components of the society and the development of the community of Perl.

In Perl you can enjoy a wide variety of excellent wines. With its small but fine growing area of about 116 hectares in the border triangle, is Perl is only quality wine growing community in the Saarland. The wine belongs to the "Mosel" (formerly "Mosel-Saar-Ruwer") growing area and bears the area name "Moseltor". Except for the Moselle, only about 0.5 hectares of land in the Saarland are used for viticulture.

In the past, especially Elbling vine dominated the viticulture of Perl. However, in the recent years, Burgundy varieties have developed a certain dominancy. Furthermore, grape varieties like Müller-Thurgau and Riesling, among others, are nowadays also cultivated.

A symbol for the region and its history

Since the summer of 2018, an exciting piece of art by the artist Claudio Raffaele wears the viewpoint of Perl with the name of the "Dreiländerblick". A stone sculpture that appears very modern at first sight embodies the border triangle and the viticulture in the region in a very special artistic way.

On closer inspection, the seemingly futuristic work turns out to be a boundary stone with a message. The large sandstone on a triangular foundation stands as a symbol for our border triangle. The three country abbreviations D - F - L are lovingly worked into the foundation. The location at the viewpoint "Dreiländerblick" has been chosen accordingly. Sculpture and location must be considered as a total work of art.

The special location, directly on the Hasenberg in Perl, does not only stand for the border triangle. The Hasenberg is one of the most desirable vineyards in the entire region. It was not without reason that the then Prussian King Friedrich Wilhelm III made claims to the vineyard site at the Congress of Vienna in 1815 as part of the territorial distributions. This good location with its first-class wine had to belong to his territory. This wish is also the reason for today's somewhat unusual borderline. Our exciting work of art also takes up this topic in its own way. If you look from above into the attached stainless-steel construction, the interior reminds you of the ramifications of a grapevine.

In addition to the symbolic representation of the border triangle and viticulture, the materials used have also been deliberately selected. The sandstone as a weatherproof element symbolizes the culture of the region, which has grown together over the centuries, completely independent of the respective borders and claims to power of the individual epochs. The embodiment of viticulture was also deliberately chosen in stainless steel. The Perl wines are appreciated by wine connoisseurs as quality wines.

How can one imagine life on a Roman estate in the ancient world in detail?
Immerse yourself in the exciting and lively world of the Roman Villa Borg! The unique reconstructed villa complex gives you an idea of how privileged people lived in those days. The open-air museum with the archaeological museum, the splendid villa bath, the harmonious gardens, the conference and festival rooms, the gatehouse, the Roman kitchen and finally the Roman tavern invite you to stay.

The archaeology park welcomes its guests with extensive innovations such as the contemporary entrance area, the barrier-free car park, the friendly animals, the modern multimedia table and the lively craftsmen's huts. Numerous events fill the estate with life throughout the year.

Villa Borg’s history
After more than 30 years of excavation and reconstruction, the Roman Villa Borg Archaeological Park has become one of the main attractions in the region. The whole complex illustrates the different aspects of Roman country life in a most impressive way to the numerous visitors. The complex is unique in Europe in its way.
In addition to the buildings, which were designed to be as close as possible to the ancient architecture, gardens were also created to complete the overall picture. Due to the excavations that are still being carried out and the knowledge gained from them, the image of the site is constantly changing.

Historical development
The teacher Johann Schneider discovered traces of a Roman settlement between Borg and Oberleuken more than 100 years ago and carried out the first smaller excavations. Since April 1, 1987 a Roman villa has been scientifically excavated in Borg by the Cultural Foundation for the Merzig-Wadern District in cooperation with the State Conservatory, the Employment Administration and the municipality of Perl. It turned out that the remains of one of the largest Roman villa complexes in the Saar-Moselle region are hidden here.

Reconstruction
In 1994 the decision was taken to resurrect the entire estate according to the results of the excavations and the current state of villa research. In the following years, the villa bath with tavern, the manor house with museum-like furnishings, the designed inner courtyard, the residential and economic wing as well as the gate system and the Roman kitchen were rebuilt. Due to the ongoing work, the appearance of the villa changes almost daily. The excavations continue on an area of over 7.5 hectares.

The imposing mosaic floor of the Roman Villa in Nennig is one of the most important archaeological monuments of the Saarland, outstanding beyond the region. It has an impressive size of 160 m² and is therefore the largest known mosaic north of the Alps.

The mosaic floor decorated the atrium of a magnificent Roman estate in the third century AD. It depicts scenes from the Roman amphitheatre. Six octagonal picture fields depict animal hunts and exhibition fights, the seventh and largest picture in square format shows the bloody fight between two gladiators. The pictures, which captivate with their richness of detail and plastic effect, impressively testify to the richness of the cultural landscape on the Moselle around 2000 years ago.

Discovered in 1852, the mosaic of Nennig was already secured by its own protective building in 1854. This protective structure is still in operation today and is therefore one of the oldest examples of museum architecture in Germany.

Reapaired in 1874 and restored in 1960, the stone carpet once adorned the entrance hall of a portico villa built in the 2nd and 3rd centuries AD. With its 15.65 m x 10.30 m surface, richly decorated with ornaments, the mosaic is a jewel and surpasses all mosaics found in Roman palaces and villas in the Moselle area to date. The main building, which is no longer preserved, was formerly 140 metres wide and had a total length of 650 metres, with lobbies and bathing facilities. Only the Roman mosaic of the entrance hall has been preserved. 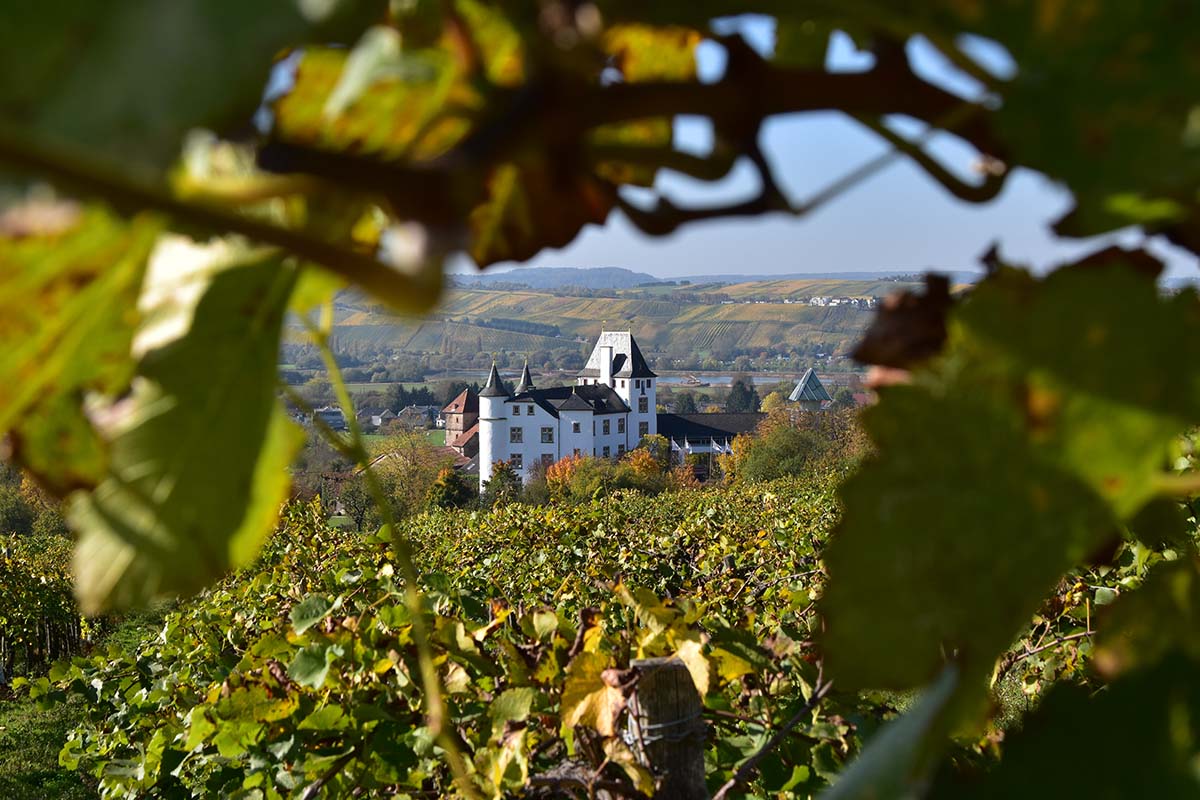 PERL AT A LOOK